Completely in the Dark 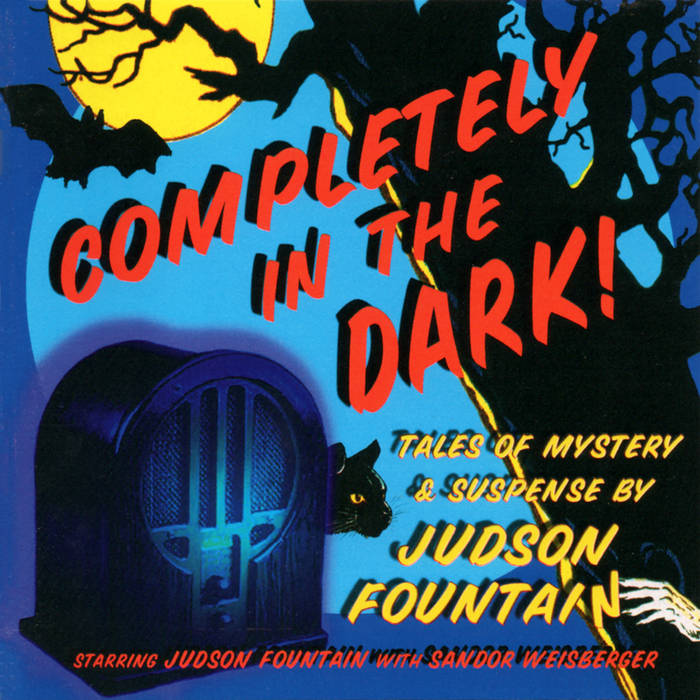 The Execrable Bede There's no drammer like a radio drammer, and there's defintely nothing else remotely akin to the genius of Judson Fountain (and the redoubtable Sandor Weisberger). I was lucky enough to have lived in the coverage area of WFMU when these were first re-broadcast by Ol' Pal Irwin, & to have heard the original radio drammer that Judson wrote for WFMU and performed with The Old Codger. Truly the scariest shit ever recorded.

Before TV captured the nation's attention in 1948, radio was the most popular form of domestic entertainment. Nowadays it's mostly music, news, and talk shows, but from the 1920s through the 1940s, radio airwaves featured dramas, detective stories, comedies, and murder mysteries. Judson Fountain (b. 1934) grew up during the heyday of classic radio drama. He developed an obsession with gothic-tinged series like Inner Sanctum, The Shadow, The Whistler, and Lights Out! While the majority of his fellow Americans were evolving into couch potatoes, Judson embraced radio as the superior medium for drama, and felt compelled to single-handedly revive the art. That he lacked training, technology, skilled staff and a budget did not deter him. Ed Wood, Jr. made movies; Judson produced radio dramas.

Fountain was between 35 and 40 when he created these dramas (pronounced "drammers" by sidekick Sandor Weisberger). He wrote, directed, and starred in these extremely primitive affairs, often recruiting Weisberger as announcer and occasional co-star. Fountain's simple, derivative plotlines employ Halloween kitsch—spooks, witches, haunted houses—as vehicles for morality plays about redemption for the honorable and damnation for evil-doers. Every character in a Judson drama was simply good or bad. Those who embodied virtue were invariably rewarded, while those of criminal bent (or even those who simply misbehaved) were punished, often in ghoulish ways. There were a few characters who managed to "repent of their evil ways," but for the most part, the respective dispositions were starkly fixed in black and white.

Judson's work was characterized by amateurish scripting, egregious ethnic accents, and inept editing—all seasoned with copious needle-drops of creaking doors and howling wolves from the timeless Elektra Sound Effects Library. But this extreme amateurishness and unwavering sincerity synergize to great advantage in Fountain's theatricals. There is charm in the clumsiness, and befuddled amusement in the often-abrupt plot twists. Jackson Brian Griffith, former Pulse Senior Editor, once summed it up: "Imagine paint-sniffers aiming for the Firesign Theatre and hitting Plan 9 From Outer Space." Repeat listenings are rewarding: there is an odd musicality in each script's rhythm. As with Monty Python or Wayne's World routines, key lines of dialogue tend to creep into your conversation. "So long, punk, I've t'ings to do!" And "What? I thought I heard the cat speak!"

The original recordings were pressed on very limited-run LPs—possibly 200 copies each. The jackets were hand-fabricated with grainy photostats pasted on, probably by Judson himself.

We tracked down Judson in 1995, reunited him with Sandor, interviewed them on the radio, even helped them produce a new "drammer," entitled "The Nasty Roomer" (heard on the companion album, DARK DARK DARK TALES). Judson provided us with copies of other recordings we didn't know existed. COMPLETELY IN THE DARK, issued on CD by Innova in 2003, represented the first time Judson's dramas were released beyond the original limited private pressings.

These relics can be polarizing artifacts, engendering love or loathing. Listeners will give this album five stars—or zero. That's an average of 2.5 stars, but no one will actually give it a 2.5. Nonetheless, Judson has his audience. These echoes of a bygone art have an off-kilter perspective that in some ways is more entertaining and charming than any note-perfect, professional replica of the original form.

Judson passed away in 2005, but he was proud to know his legacy was being preserved for future generations.

JudsonFountain.com
Songs in the Key of Z: The Curious Universe of Outsider Music
KeyofZ.com

"Brand new dramas, on records, as only radio can bring them to you."