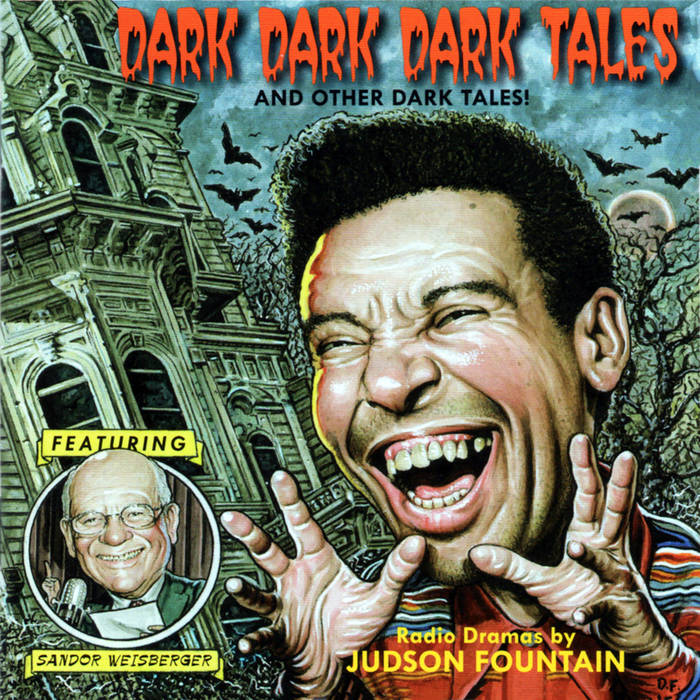 "As you know, they run radio programs different times. The same time it's daytime one place while you may be listening, it's night time some other place they're listening at the same time you are. So if it's daytime you're listening to this program now, well, just listen. But if it's night time you're listening — STOP!, whatever you are doing. Turn out all the lights, because right now, Judson Fountain brings you a brand new radio drama, as only radio can bring it to you." (Sandor Weisberger, intro, The Gorgon's Head)

For fans of old-time radio tales of mystery and suspense, Judson Fountain is back to shed some "dark" on the subject.

In 2004, we compiled a CD, Completely in the Dark, featuring radio dramas produced and written by Judson Fountain in New York during the late 1960s and early 1970s. This material had originally been released independently by Judson on vinyl LP, in limited editions of unknown quantity. By the time of our CD release, Judson had achieved worldwide cult notoriety thanks to airings of his dramas on WFMU radio since the early 1990s. When the broadcasts began, we didn't know the whereabouts of Judson or his announcer sidekick, Sandor Weisberger. In September 1995, they were both located (Judson in Jersey City, NJ; Sandor in Brooklyn) by a fan, Geoff Wrightson. The two artists had long been out of contact, but were reunited in a historic one-time WFMU appearance on Oct. 30 of that year, to commemorate Halloween.

Judson and Sandor were as delightful and cooperative as we expected, and excited to be back on radio. Judson was innocent and free with his emotions, ebullient in his enthusiasms, and respectful about the people he admires in show business. Sandor was warm, patient, and avuncular.

The old buddies were interviewed and given a transcript of Judson’s 1969 classic The Old Woman of Haunted House for live reenactment (with sound effects). They gave an intrepid performance, re-creating their roles and character voices with gusto. The duo was also surprised to be presented with a new radio drama, The Nasty Roomer, written by charter “Fountainhead” Don Brockway specially for Judson and Sandor. In a one-take, live sight-reading, they acted their parts with élan.

After that visit, we lost touch with Judson, and despite tenacious efforts to locate him, could not. Years later we found out that he died in 2005. Judson's dramas have been preserved with great affection in two volumes. There are enough additional dramas for a third volume, which we hope to release in a few years. In the meantime, we invite you once again to "turn out all your lights, and be completely in the dark."

Also available: Completely in the Dark: Tales of Mystery and Suspense by Judson Fountain