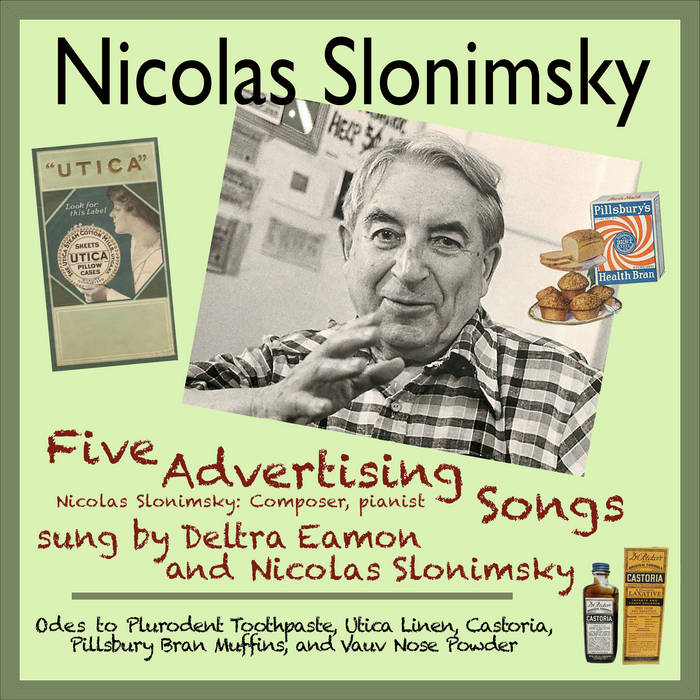 When I came to America from darkest Russia in 1923, I instantly succumbed to the unique poetry of commercial advertisements in the gaudy pages of American magazines. Cynicism came much later. I set to music some of the most uninhibited outpourings of the advertising Muse. I can even claim priority as composer of the first advertising songs designed for concert performance. They are: "Make This a Day of Pepsodent!," "Utica Sheets and Pillow Cases," "Pillsbury Bran Muffins," "Vauv Nose Powder," and "Children Cry for Castoria."

The Pepsodent song was on a par with the best fourth-rate Italian operas, full of emotional bel canto. The sheets of Utica were spread with the artiness of a slightly adulterated Schumann. The Bran Muffin ad bore a banner headline, "And Then Her Doctor Told Her …," showing a bearded Germanic physician pointing an ominous index finger at a dejected but beautiful female sufferer slumped in an armchair. One could expect the worst, but the doctor in the ad was concerned only with correcting the lady's "faulty elimination." I borrowed the theme from Rachmaninoff's C Sharp Minor Prelude to depict her condition in suitably dramatic terms. There followed "No More Shiny Nose!," attesting to the durable effect of the powder. In the Castoria song, the climax came with the cry, "Mother, relieve your constipated child!" A parlando recitative against a dissonant tremolo reassured the parents that Castoria did not include harmful drugs or narcotics.

My advertising songs enjoyed a gratifying success at friendly gatherings. Eventually I decided to publish them. To my surprise, the Pepsodent Company refused to let me use their brand name, so I changed it to Plurodent, and revised the text accordingly. The nose powder went out of existence, so I did not have to bother about the copyright. Amazingly, the Castoria people gave me unqualified permission to use their name.

In the present record, these fruits of my early enchantment with the advertising ways of American life are vocally rendered with appropriate dash by soprano Deltra Eamon.

Thanks to RRG for the flexi loan.